Last winter, I instituted a room by room cleaning project. I emptied closets and cupboards. Nothing was untouched. Nothing uncleaned. I got rid of boxes of stuff.

In Brad Warner’s fantastic book, Sit Down and Shut Up, he writes this about things:

Every object you acquire comes with a certain degree of responsibility for that object. Most of us don’t realize this, which is why we treat the stuff we own so incredibly badly.  You need to take care of these things. When you don’t, you cause yourself and others a heap of trouble.

The only way to really be happy is when you desire as little as possible.

I keenly felt the burden of things during my clean out, but since then, I’ve continued to acquire. I was unable to give it up then, but I’m coming around. I just bought a new computer and deliberately let go of some files. I purchased Spotify and stopped buying music. I’m thinking of dissolving my CD collection.

Technology helps as certain technologies go away like VCRs and DVD players, those relics left behind lose their meaning. Streaming services mean you no longer have to own your movies or your music and thus the burden of caring for it.

It’s sometimes noted with a sneer by older generations that millennials don’t want to own things like cars. I think owning things comes with a certain complexity that this generation has decided to avoid. I think we need to, perhaps, applaud that thinking and re-examine our own.

I work in marketing, and I’m fortunate to really enjoy working with our entire team. One individual who handles smaller accounts and ingredients came to us from a pharmaceutical company that closed nearby. Her name is Casey, and her background is in agronomy.

She’s a very good sales person – organized, empathetic, and quietly awesome. She also has the best DIY mentality I’ve ever seen. She lives in the southern part of the county in a rural area, buys from thrift stores, and does her own car repair. She’s a 20-something that can drive a manual transmission. What’s not to like?

She told me recently that her boyfriend has the same attitude. His ancient Jeep died on the way home recently, and he found a late 80s Mustang on Craig’s list that night that he hauled home to fix. She showed me a photo, and the car was in great shape for the year. My brother owned one just like it in the 90s. It needed just a few things to make it road worthy, which gave them both time to get the Jeep back on the road.

I admire her a great deal, and I admire her attitude and talent which gives her the confidence to dig in to any project.

I recently completed Buddhism and Modern Psychology by Professor Robert Wright on Coursera.org. In the supplemental material, one of the video lecturers was one between Wright and Paul Bloom on Bloom’s book How Pleasure Works: The New Science of Why We Like What We Like.

In it, Bloom talked about the essence of things. From a review of the book: “What matters most is not the world as it appears to our senses. Rather, the enjoyment we get from something derives from what we think the thing is.” Bloom argues that at the root of pleasure is our reading (or misreading) of the essence of something rather than the facts presented to our senses.

Like Wright, Bloom traces the origin of essence to natural selection. “We have evolved essentialism to help us make sense of the world, but now that we have it. It pushes our desires in directions that have nothing to do with survival and reproduction.”

Bloom argues that we endow everything including people and items with an essence that gives them a value. This is why a tape measured owned by JFK has more value than the humbleness of the object would suggest. It’s value is inherent in who owned it. It’s essence.

Essence works both ways. Bloom argues that clothing and other items owned by regular people have less value. They are herein tainted by being used.

I think Bloom’s argument is a intriguing one, and I find a lot to relate to. I’ve noticed that used items have far less market value when buying clothing at thrift stores and on eBay. Clothing of all types goes for a fraction of its retail value. Even unique pieces can usually be found with enough patience, and their value as determined by the market is far under retail. If you’re concerned about essence, then, by all means, buy things that have never been used. If you’re not, just wash them, and they’ll be yours.

Reduce, reuse, and recycle your books. These gems were picked up at a local library book sale. I also find books at yard sales and thrift shops. Not pictured here is a copy of Sophia Amoroso’s book #Girlboss, which I picked up at a yard sale a week later. I read it at the library but recently wanted to re-read it. 50 cents at a yard sale? MINE!

I buy so many books used that I stopped remembering what was on my pile. Recently, I made a Google spreadsheet of them so I have easy access to my list while on the road. Thanks Google Drive. It currently numbers more than 150 in alpha order. It’s not hoarding if it is books, people. Look it up.

I found a hardback copy of David Greene’s book Midnight in Siberia, pictured on top of the pile above. This was a most fortuitous find because I was able to see him speak two days later at an event for Leadership Lancaster. He signed my book after the event. I’m part of LL’s book club, and along with another attendee, we asked that Greene’s book be our next selection.

More than 10 years after buying my home, I may finally have made peace with oil-based paint. The last time I painted this metal Bilco door, I got a big assist from the paint team at Lowe’s – specifically one knowledgeable woman behind the counter than gave me the scoop on how to make it work. Sand that surface lightly, clean it well, don’t mix the paint too vigorously, and take your time.

Sherwin Williams paint and Purdy brushes are my favorites, but I had purchased a cheaper brush for this job thinking I wouldn’t be able to clean it to my liking. With a little patience,  I have been able to reuse it. Take your time cleaning it. Soak it, rinse, soak again. When I thought I had as much paint as possible removed, I took a bit of Dawn and rinsed out the brush one final time. Dawn was used to clean bird feathers after the Exxon Valdez oil spill in Alaska. It works. 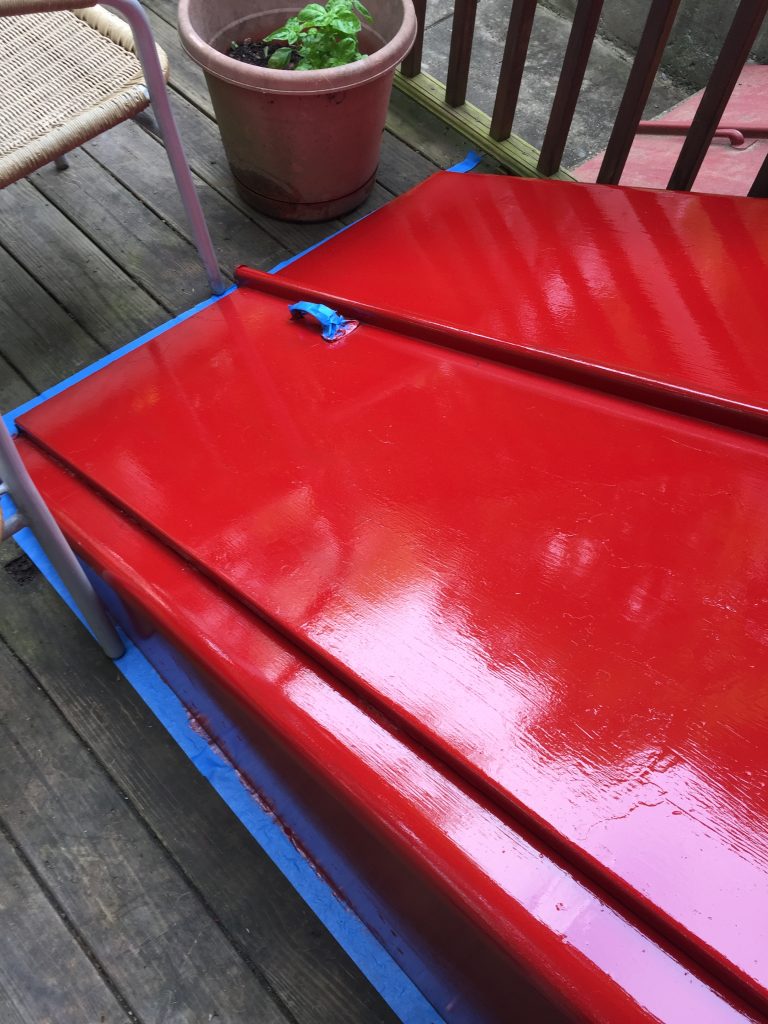 For the past several years, I’ve kept track of every dollar I spend on clothes in a Google sheet. It’s a very nerdy endeavor for a former English major, but it keeps me on track to spend less and to spend wisely. I also have a formula that calculates the  amount of money I spend as a percentage of my after-tax income and the percentage of total purchases spent on items that were already worn. Americans spend a massive amount of money on clothes, and much of those pieces end up in thrift stores and consignment shops where you can find them for a song. Plus keeping track of your spending will keep you on budget and allow you to make goals. This year, my goal is to increase the amount I spend on used items as opposed to new ones and decrease my overall spending. In 2016, I spent 2.92% of my after tax income on clothing/shoes/accessories and 82.79% of money spent was on used items.

Tips for your spreadsheet: Syntax to sum a column based on a criteria. Mine is “used.”

This is Mr. Nutto’s Chair. It’s a Belter Chair from the late nineteenth century. It is rosewood with a needlepoint cushion that is not original. It was given to us by my father in law, Howe, who gave us the chair and the story several years ago.

Mr. Nutto was an elderly suitor to Vern, my husband Jeffy Guy’s grandmother, who was a widow for half her life. Vern’s first husband, a wealthy pharmacist, died when he was 40. Jeffy’s mom was 6 at the time. Her brother Rus was 10 and would soon get shipped off to the Milton Hershey School, a private school founded by Hershey Chocolate’s founder.

Vern remained a widow for the rest of her life, but later on, Mr. Nutto came calling. He wanted to marry Vern, but she refused. As the story goes, he died not long after the proposal. It’s unclear when he gave her the chair.

Had she agreed to his hand, he would have left her with a fortune. As it stands, he left her with this chair, which is now ours. It was half broken when we acquired it, and through wear, we fully broke it. I got this photo from the repair shop to indicate it is finished.

Finding someone to repair an antique, rosewood chair is no easy task. When I presented Jeffy Guy with the estimate, he said, “I like that chair, and it’s Mr. Nutto’s chair.” 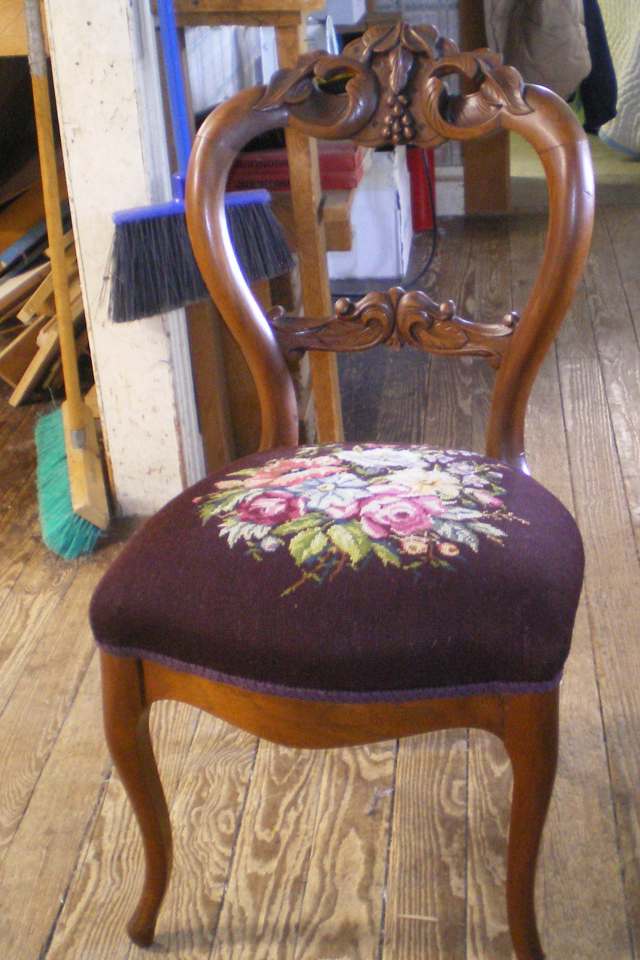